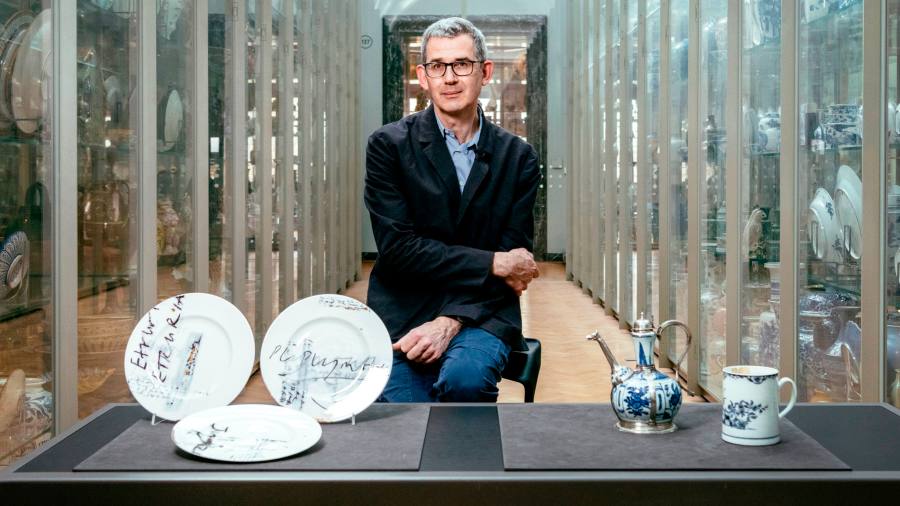 “There is such a passionate and passionate revival of people making pots at the moment. It is a glorious and fabulous time,” says Edmund de Waal. The British ceramicist and writer sits in a glass-walled room in the ceramic galleries of the Victoria and Albert Museum in London, gazing at rows of glass cabinets filled with decorative vessels across centuries, continents and cultures.

“I think one of the things that people connect with pots is this amazing thing that it’s kind of hard. It takes a while. You learn to put your eye in it and you learn to put your hand in it. , but then things go wrong in the kiln or in the enamelling. It’s a real base, a beautiful art because you always have to start over.

De Waal’s large-scale installations of porcelain vases – including the V&A’s site-specific “Signs & Wonders”, 425 glazed porcelain pots placed in the dome of Gallery 141, a short walk from where we sit – are presented with such quiet confidence they belie the years of trial and failure that every potter goes through.

The challenges presented by clay as a material and artists’ persistent attempts to master it are a subject of continual fascination for de Waal, a subject he explored in his 2015 book on porcelain, The white route: a journey into obsessionand which now informs a new project with the museum.

‘On the White Road’, a limited edition of 150 sets of four porcelain plates created by de Waal and manufactured by Wedgwood, is launching at the V&A this month, priced at £1,000 per set. It celebrates the museum’s relationship with the 260-year-old business. In 2014, a collection of over 165,000 works by Wedgwood was purchased and donated to the V&A after a public appeal by the Art Fund.

This is the first time de Waal has collaborated on a commercial project with industry or an institution, and he says it is unlikely to happen again.

“I hit my late 50s after decades of refusing everything. People say, why don’t you do an edit of this or that? And I said, absolutely not. And then the V&A and Wedgwood ask and I say, well, yes! I mean, why wouldn’t I? I’ve been a trustee [of the V&A] and so many of my works are here. He makes gestures. “It’s my second home.”

Each plate references an object from the Wedgwood or V&A archives that de Waal chose to represent a moment in the history of porcelain as documented in her book. The original pieces, three of which are ceremoniously rolled into our room on a cart, include a blue and white Chinese porcelain ewer with 17th-century silver mounts. The piece marks for de Waal the moment when Marco Polo arrived in the city of Jingdezhen and saw porcelain for the first time.

The second piece is a Meissen covered cup with double handles, from the beginning of the 18th century, when the first European white porcelain was fired. Third, a slightly random Plymouth tankard, the first real porcelain made in England. The fourth piece, absent from our visit but preserved in the archives of Staffordshire, is The First Day’s Vase made by Josiah Wedgwood in 1769 on the day of the opening of his factory in Etruria.

The front of the plates commemorates these moments in an abstract way, with layers of de Waal’s inky black writing, some legible, some not, and flecks and flecks of gold. They recall unearthed letters or manuscripts.

“It’s the closest I’ll get, I think, to the walls I did for my Library of exile [a 2020-21 exhibition at the British Museum]said de Waal, holding Jingdezhen’s piece and tapping it with her fingernail.

“A text written above another, a layer of porcelain then a point. This is the closest thing to all of these ideas in one place. These are four short stories about objects in the collection and a sort of crossover between me as a potter and me as a writer.

On the back of each plate is the printed signature of de Waal, as well as golden emblems representing the original object, with a date stamp and the hallmark of the V&A.

They are four stories of objects and a sort of cross between me as a potter and me as a writer.

“Edmund is perhaps the potter – and writer – most intimately associated with the iconic material of porcelain,” says Alun Graves, senior curator of ceramics and glass at the V&A, 1900 to the present day. “Her work is underpinned by a deep knowledge and understanding of the history and cultural significance of porcelain and this collection extends the story.”

De Waal hopes that in addition to raising funds for the museum, the collection will encourage people to rediscover the ceramic archives of the V&A and Wedgwood. “You know you can get lost in these galleries, but if you think about the people, these people that I feel a deep affinity with, you connect to the material a lot more,” he says. “So we’re not just saying, look at these huge ranges of ceramics. We say, think about the people who made them. That’s kind of what always matters to me.

“On the White Road” plates will be available from September 19 at the V&A vam.ac.uk