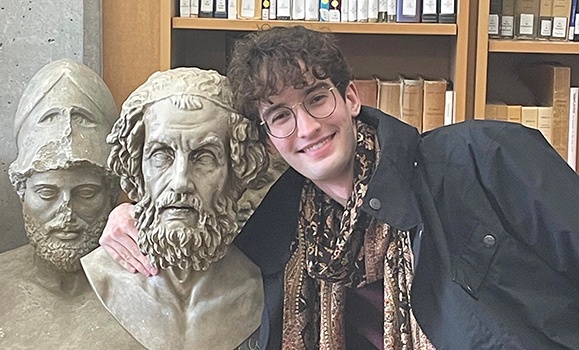 The Department of Classics celebrates a nike or one Victoria. For those who do not know Greek or Latin well, this means a victory!

The department recently discovered that three of its recent graduates (one of whom is now a Dal graduate student) won the advanced level competition in last year’s National Sight Translation Competition organized by the Canadian Language Association. classical music (ACC), winning prizes in Greek and Latin. .

The annual competition is open to undergraduate students from Canadian institutions who have completed at least two years of study in Greek or Latin. The competition itself is very much like writing an exam, with each contestant having 90 minutes at their own university to complete the French or English translation. No dictionaries allowed, of course.

“The competition is extremely competitive, and usually all the best undergraduate ancient languages ​​students in the country try their hand at translating the Greek and Latin passages unseen selected that year,” says Dr. Eli Diamond, director of the Classics Department . “Although we are the largest Classics program east of Montreal, we are still tiny compared to other much bigger and better endowed programs across Canada. This makes their achievement all the more remarkable.

The path to victory

All three students began their undergraduate studies in the Foundation Year program at the University of King’s College, then completed a Classics major at Dalhousie.

“These competition results are also a testament to the remarkable collaboration between the Foundation Year Program and Dalhousie Classics in attracting and educating some of the best humanities students in the country,” adds Dr. Diamond.

All three students graduated last spring with first-class honors. Joanna wrote her honors thesis on Augustine with her supervisor, Dr. Michael Fournier; Malcolm wrote his on Plato with Dr. Diamond, and Angus wrote his on Virgil with Dr. Peter O’Brien.

While Malcolm and Joanna are taking a year off this year, Angus, who received the University Medal in Classics at spring convocation, is continuing his studies in Classics at Dal and began his Masters studies this fall funded by the Social Sciences and Humanities Research Council.

Angus was first encouraged to pursue Latin after reading the Latin epic poem, The Aeneidof Virgil, during his first year at King’s, a text which he says continues to interest him greatly. He then took introductory Latin lessons as part of an intensive summer course and began studying Ancient Greek the following year.

“I was very lucky with my teachers, who all explained the difficult ideas needed to learn a language in the most accessible way possible,” says Angus. “A solid foundation is really important for language learning, and I’m very happy to have received this. Latin and Greek have sparked a real interest in languages ​​in me.

A love of languages

Angus has since studied Old English, Norse and early Celtic languages. He also brushed up on his Spanish after traveling to Spain last summer.

During his undergraduate studies, Angus was a member of the Classics student society, Res Publica, vice-president for one year and president for two years. He also participated in the Pythian Games each year, both as organizer and performer, usually performing poetry in Latin or Old English.

“The CAC competition was a flattering recognition to receive after several years of enthusiasm for this subject, and it is particularly rewarding to be recognized in both languages,” he says.

Angus says that as an MA student in Classics he continues to focus on language and continues his work on the Roman poet Virgil and The Aeneid.

“I specialize in Latin poetry and add a touch of Greek philosophy to it for good measure. Being able to work with those two elements in the original is a highlight for me. In order to pursue this type of work further, I am applying for PhD programs for entry next year.

Recommended reading: Create a community through the classics