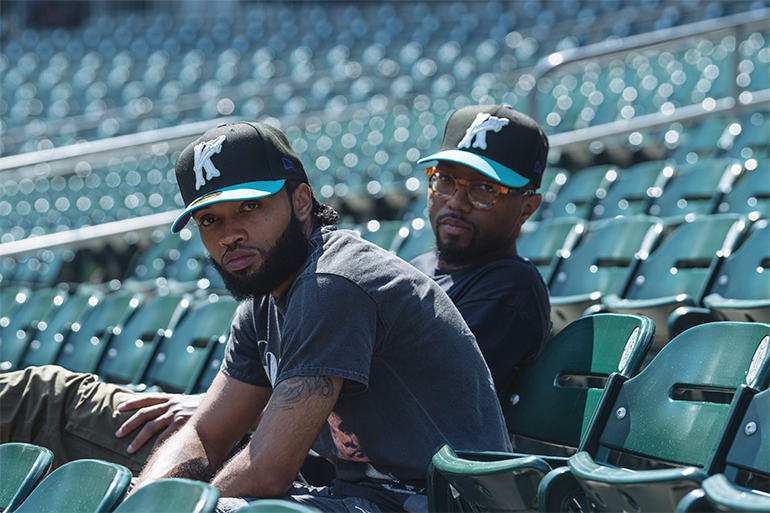 Despite debuting a year before he was born, Charlotte native David Butler remembers the 1990 Charlotte Knights jersey well – black with metallic colored stitching and stripes which, when you look closely, are actually purple, teal, peach, white and royal blue.

The Knights donned the jersey again on Special Nights of the 90s in 2013, the same year Butler returned home after graduating from Winston-Salem State University.

“The hat design really tells the story of my early days in Charlotte, coming back to Charlotte as a creative individual and looking to start a business and it ties into that jersey that the team had as well,” Butler said. . “So it was an interesting way to tell a story through design and to use a hat as a way to tell that story.”

Butler founded a creative consultant and artist known by the nickname DavehasWingz, is the founder of Analogue Luxury. His practice is rooted in vintage photography mediums such as Polaroids and 35mm film. Brown owns hat shop Charlotte FittedsCLT, known for her custom designs of New Era brand 59/50 fitted hats.

Along with the collaboration, Butler produced a film about HBCU’s creative impact on the world and designed the hat with Brown and FittedsCLT.

“HBCUs are pillars of global culture,” Butler said. “We know they produce the most black lawyers and black doctors, but a lot of the creative culture and the movements that moved society forward, the civil rights movements, the Black Panther movement, started on the HBCU campuses.”

He hopes their work on HBCU Night is a first step in forming a longer partnership with the Knights, as that was their original vision. Butler and Brown want to develop a platform and community brand that creates a pipeline of opportunities for Charlotte creatives to collaborate with the Knights on merchandise, performance and programming.

“It’s important for people to know that creative jobs and creative people play as much of a role in the city and the growth of the city as any other industry. Charlotte is known for finance, banking, healthcare and technology, but the creative industries underpin all of those things,” Butler said. “We see opportunities like this to continue to tell stories and to continue to push creative culture to the forefront, and a lot of that creative culture starts in HBCUs, through young black people.”

In March 2021, the couple decided to collaborate on a hat that would help connect the dots between the city’s creatives and the impact they can have on its wider culture. As a native of Charlotte, Butler was determined to pay homage to his city by designing a custom knight’s hat.

After the hat was completed, Butler and Brown approached the Charlotte Knights organization with the idea of ​​working together on its release. Instead, they had the opportunity to collaborate on the team’s next HBCU party, a special theme party scheduled for Friday, September 2, celebrating historically black colleges and universities.

Brown designed a t-shirt that will be given out to the first 2,000 fans to enter the park on Friday. It features the Charlotte skyline, “HBCU Night” and “1867”, a reference to the year the first black college baseball team debuted at the Institute for Colored Youth – now named Cheyney University of Pennsylvania.

The hat will be released at 11 a.m. the next day, September 3, exclusively at the FittedsCLT store at 621 McNinch St. in Uptown’s Third Ward.

HBCU Night will include performances by the band at the local HBCU Johnson C. Smith University (JCSU), as well as members of the school’s historically African-American fraternities and sororities.

Butler helped Dr. Jemayne L. King throw the first pitch. King is a poet, podcaster, author, and former professor of English and Black Studies at JCSU, where he created the world’s first college English course devoted to literature and identifying sneaker culture within of sneaker culture.

King also contributed to a book titled The New York Mets in popular culture and in June gave a talk at a symposium on baseball and American culture at the National Baseball Hall of Fame titled Straight Up NYC, Like a Mets Fitted: How the New York Mets Influenced Hip-Hop Music and Culture.

He currently teaches English and is the director of the Institute for Hip-Hop and Cultural Studies at Virginia State University.

Campus Connections, BCT Inc. is the nonprofit partner of the Knights’ Sept. 2 game against the Durham Bulls. The Middle School Tour Group works with high school students to educate them about the educational and cultural opportunities available to them at HBCUs. Butler said profits from fans who round up their purchases at the park during the game will go to the nonprofit.

Become a nervous member: Get better connected and become a Queen City Nerve member to support local journalism for as little as $5 a month. Our community journalism helps keep you informed through a range of diverse voices.