Celebrate a Slice of Americana 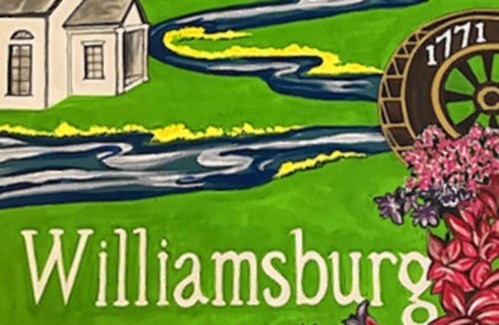 On July 4, 2026, our United States will celebrate the 250th anniversary of the American Declaration of Independence. Yet we retained the ideals of Britain, such as representative government and the English language.

Today, the years seem longer than before. We’ve been home for two now and, as the song says, “Don’t move around much anymore.” We could use a dose of good news and I’m here, as the town crier, with sweet words from Williamsburg. While the country has to wait four years for its 250th anniversary, the 250th for “Burgy” is anything but.

Everyone is invited to share in the joy of our city in July!

We wanted to celebrate in 2021. COVID-19 came and took away many plans. Therefore, 250 turned into 2022. Williamsburg and Haydenville will be celebrated twice. Friendliness is a small-town attribute for those who scoff at kindness when in fact, that’s what the world needs right now.

One example is that the city’s three churches often find seasonal events and fundraisers attended by parishioners from each other. Williamsburg Church and Our Lady of the Hills are teaming up to provide free home-cooked meals for seniors on Saturdays. Each of these volunteers deserves a shout out!

In 2013, the late Dave West proposed that the best way to celebrate the city’s 250th was to ask its citizens to submit true stories. “Our Town” includes 464 heartfelt pages of growing up in Burgy, interviews, arrivals, departures, stories and photos. American’s reputation for short memoirs is shattered by its warm tales of love and service.

The people of Hilltown may seem reserved at first, but a made friend is yours for life. Fittingly, our 250th book is dedicated to David and Nancy West.

The spirit of a city lives in Vox populithe voice of his people.

Williamsburg is a slice of Americana. Its foundation combines strong people and rocky ground. My shovel echoing a “ding” every time I tried to plant a bush is as true now as it was in 1995. Determined pioneers moved many stones to create fields and erect walls. The hardy New England poet Robert Frost found the physical labor underlying the words that followed.

America was an English colony when Burgy was born. The United States’ declaration of independence from empire was an unfulfilled dream and a nightmare for others. Loyalty to the crown was a default status from birth. Across the sea was a king and a parliament making rules and laws with no regard for his subjects, enforcing them with troops in red cloaks.

The restless settlers of Massachusetts rebelled. Farmers from Concord and Lexington became Minutemen, and the die was cast.

I know more about Northampton’s 300th anniversary in 1954 than Williamsburg’s 250th. In 1952 the Air Force sent me to the UK. I was my dad’s on-site Jimmy delivering an engraved invitation to the mayor of Northampton, England. He was the mayor of Hamp; I missed the big parade.

My initiation into civic service in Northampton has passed on to the good people of Williamsburg. A city of 2,500 souls versus a city of nearly 30,000 requires similar tasks but without the paid labor. I wasn’t here long before I joined the advisory board of the Council on Aging. Much later, a group of talented artists created our entry for the State House Hall of Flags. Dozens of “Burgy” natives shared their stories in the 250th anniversary book. I will quote only excerpts of my own.

Memorial Day has always found Dick Hillenbrand, Dave West and many more at Veterans Memorial Park in downtown. I had the honor of speaking there in 2012. Subsequently, I began a poem which appears in our 250th book:

Consider a village that honors its past

Men & women to whom Country-Last

Never crossed their mind when a call

In a winter drawer. The loves of the prom of the end of the year

Would rarely survive the deep distance

Our first friends here were Jack and Lorraine Barrack. I admired Jack for his quiet dedication to poetry. Jack’s departure is recalled in the conclusion of “Postscript to a Poet”:

Pick the latest books of life tokens in the mail.

Farewells had fled his vocabulary,

On tiptoe in the air without a glance

Our way. No published obituary

Friends from Northampton asked Maureen and I about retiring to Williamsburg after 40 years at Northampton. Our hope was that time itself moved more slowly in the hills. So far, so good!

Saturday July 16: Williamsburg for wanderers. Crafts, circus performers, book sales and other entertainment at Meekins Library; an ice cream social at The Grange; food trucks and live music at Burgy Brews, and a square dance at The Grange at 7 p.m.

Sunday July 17. A Haydenville 250th Anniversary Parade through downtown Williamsburg will take place from 9:30-11:30 a.m., followed at 1 p.m. by a barbecue chicken and music by Patrick Callinan hosted by American Legion Post 236.

Columnist Jim Cahillane lives in Williamsburg. “Our City–2021. Memorabilia from Williamsburg and Haydenville” is on sale at the Meekins Library. He is a member of the Society of Poets of Florence.