Bring a poetic vibe to Ponda 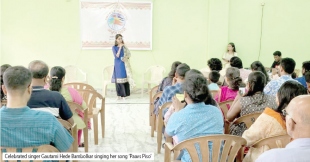 Bring a poetic vibe to Ponda

Ponda has undoubtedly produced many talented artists and art and culture are deeply rooted in the villages of the taluka. After a lull of nearly two years, Goan poetry came to life during the recently organized poetry recitation program ‘Paavli- Ek Paavsali Saanj

The memes about whether Ponda is part of North or South Goa are unlikely to see an end. The taluka, formerly known as the Antruz Mahal, has long been hailed as the cultural capital of the coastal state for its rich culture, temple architecture and a totally different vibe from the rest of the state. The taluka is geographically at the very center of the state, which makes it an ideal place for people from the cities of Goa to travel and keep in touch with Ponda. The city has somehow stayed away from all the hustle and bustle that the rest of the state is witnessing, making it a great place for arts events.

Antruz Ghudyo, a socio-cultural organization based in Bandora, Ponda derives its name from the old title of the city in hopes of maintaining and upholding the cultural heritage the city has left behind. Initially, it started as a group of young people, focusing on participating in cultural competitions (former winner of Yuva Mahotsav, the largest intergroup and collegiate cultural festival) to now organizing events, the group has come a long way. The organization recently held its ninth annual poetry recitation program ‘Paavli- Ek Paavsali Saanj’, translating to ‘A Rainy Evening’ at the Temple Hall in Mahalaxmi, Bandora, Ponda. What started as a fun idea nearly a decade ago is creating its own identity in the Goan literary scene.

“The idea was born during one of the group’s meetings to have a monsoon-themed poetry recitation. The aim was to encourage Konkani poets and give them a platform to showcase their art. But over time, the program has become a multilingual event with poets presenting poems in Marathi, Hindi and even English. Even the souvenirs presented to the participants are beautifully designed raincoats or umbrellas,” says Tanvi Bambolkar, former president and member of Antruz Ghudyo, who is herself a writer, an English teacher and holds a doctorate in folk theater from Goa. “I remember a year when we even gave paper boats to the public, it was fun. But the idea that monsoons are always romantic and fun is not true. We had several Sattari poets this year and it was a stark reminder of how the monsoon for people in rural areas is completely different. Poems about floods and the suffering of farmers brought a different and deeper perspective. The pain found a vent through poems,” she adds.

Speaking about organizing the event, even during the Covid pandemic, Saidatt Kamat, President of Antruz Ghudyo, said, “Last year, the program was broadcast live digitally on Facebook from the premises of the temple. of Mahalaxmi because we didn’t want to break the continuity. This year we had a full circle moment as it was held again in the same temple premises but with a real, live audience. The event coordinator for this year, Kanya Pavse Kamat, adds, “Members missed the fun of meeting in person and organizing the event last year. The feeling of having a live event with a real live audience is much more satisfying.

While the participating poets drenched the audience with their pun amid the tantalizing smell of onion pakoras, the organization was showered with praise by eminent Konkani poet Uday Mahambre, who also presided over the recitation this year. “Given that the group leans more towards drama and acting, their tenacious efforts to contribute to the literary realm is admirable. Preference is given to emerging poets who are young but have consistently created quality work and this is remarkable. Usually, such programs only invite established poets. Another cool thing is that they still hold this event in the rural areas of Ponda which is great as the audience there is much more enthusiastic and responsive. In the end, that’s what a true artist desires,” says Uday.

In this year’s edition, young poets presented their poems namely Shraddha Gawandi, Aakash Gaonkar, Gautami Chorlekar Gawas, Vishal Gawas, Mahadev Gaonkar, Mamata Verlekar, Kaksham Naik, Aishwarya Nair and Varsha Malvankar. The feature was opened by band member Gautami Hede, a well-known singer and recipient of the State Prize for Playback Singing, with her song ‘Pavas Piso’ (Crazy Rain) which is written by Adv Hrishikesh Kadam and composed by Gautami herself. The atmosphere was such that the public could not resist presenting their own poems. Participants received rainbow-themed umbrellas from Sahitya Akademi Award winner, Devidas Kadam, as a token of love from the organization.

While we are grateful that things are getting back to normal somewhat, poetry lovers are looking forward to next year as Antruz Ghudyo prepares for the landmark tenth edition of his flagship event.