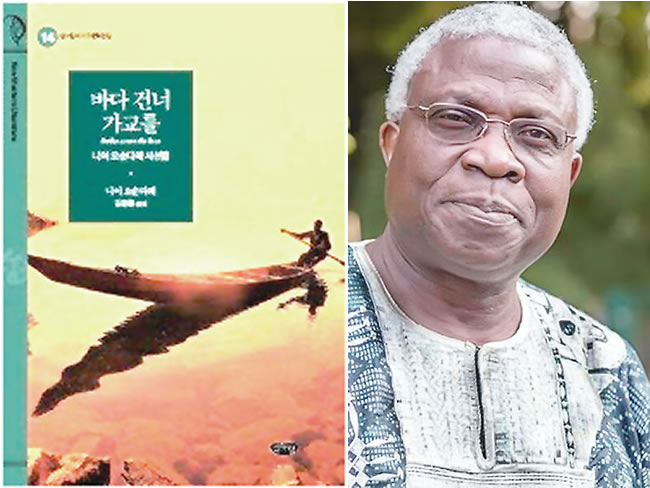 Prominent scholar and poet, Professor Niyi Osundare, shares lessons from the complex and often confusing process of translating some of his poems into Korean.

A new 240-page book containing the Korean translation of a selection of my poems arrived in my hands a few weeks ago – after waiting six months in the parcel locker of the Nigerian Post. Expected but welcomed with enthusiasm. An ample and carefully selected volume of four decades of my writing career, these poems cover a cross-section of my thematic concerns and stylistic idiosyncrasies. As indicated in the foreword below, the translator’s choice of poems is representative and admirably professional. But beyond these virtues, there are lessons I have learned from the long, complex, and often confusing translation process that deserve to be shared with readers, given their instructive instantiation of the role of literature in cultural diplomacy, international understanding, discovering and cultivating socio-political affinities where one might previously have thought none existed.

“Bridge across the Seas”, a line chosen from one of the translated poems, which serves as the English title of this book, is a happy articulation of the goal of the translation project and of the book itself, a goal that speaks to the Korean policy regarding the empowerment of non-Western literatures, the broadening of the reach of the literary arts, and the strengthening of their power as a means of international understanding and the intercommunication of ideas..….. The rest of this story is most eloquently told by the piece below, my brief preface to the book written expressly at the translator’s request:

Seven Cheers to the Bridge Builder (The Foreword)

The ultimate and decisive inspiration for this brief preface emerged from our meeting at Book Café, the bustling joint founded and run by Woo Soo Kim in the port city of Bussan. It was a Friday night, October 11, 2019, and the venue was packed with the cream of Korean scholars, college professors and their students, writers, readers, and book lovers. For my part, as a guest writer whose works formed the subject of the evening’s deliberations, I was solidly surrounded at the head table by four members of this formidable scholar, one of whom held us all deeply engaged in offering an intellectual exploration of my poetry. through an interpretation of some 27 poems along with their Korean translations, in a beautifully published booklet specially designed for the evening event.

One of the most memorable issues raised at this Bussan meeting is the fate of literary works in the world’s non-major languages ​​vis-à-vis literature in the “major” ones – particularly how literary prizes have always been awarded to works written in the “major” languages. This practice of willful or unintentional neglect has deepened the long-standing divide between the languages ​​of the powerful and privileged and those of the powerless and marginalized. How, then, are we to discover the extraordinary range and richness of works written in local languages ​​far from the powerful eyes and ears of judges of “world” literary taste and merit? How can we allow the rest of Humanity to share the meanings and methods of works produced in languages ​​beyond the comprehension of literary canon makers and their authoritative endorsements?

Herein lies the necessity – and inevitability – of the act of translation as building bridges and softening the ground for the seeds of pan-human understanding and enlightenment. Because translation does not only make it possible to discover commonalities between the languages ​​and the cultures from which they come; it also makes possible the apprehension and appreciation of their areas of difference and the possible management of the politics (or politicking) that frequently accompanies this difference. Perhaps no other human attribute is more jealously territorial than language; none is more indigenous to the biological, psychological, cultural and epistemological particularities of its user. It is the multiple attempts to explore this indigeneity and negotiate this territoriality that make the work of the translator so demanding and so essential. This is also why real translation work is an exercise in interpretation and comparison, while the translator functions as a vital connector and positive catalyst.

“Connector” and “facilitator”: this is essentially what Professor Joon-Hwan Kim has been in this generous translation of my poems in Korean. His meticulous and highly professional questions and queries in our correspondence during his translation process led me back to the creative origins of many poems, while his English interpretation of some of the lines actually surprised me with nuances and ideas locked away. in the inner corners. words. Translation problems arising from my use of elliptical syntax and extended repetition, my deliberate play on word sound and sonority, my penchant for neologism and the creative rejuvenation of old words, my essentially transgressive attitude towards words and ideas – all this appeared in our correspondence, and left me with a keener and more conscious consideration of the communicative potential of words and their syntactic arrangement. Undoubtedly, it must have occurred to my translator that he was translating poems written in English but with a strong deep structure in Yoruba. For, as I said in my essay many years ago, in Yoruba, my mother tongue and first language, poetry is music, and music is poetry; the listener’s ear is forever close to the poet’s mouth*.

It has been both empowering and exciting to work on so many lines with eagle-eyed teacher Joon-Hwan Kim! I thank him for his patience and wisdom; just as I am grateful to Professor Jaeong Kim for the creative drive that led to the translation project, and his warm and empowering enthusiasm. And to all the people whose efforts have made my poetry accessible to the Korean public, I say Mo dupe o (I really thank you).