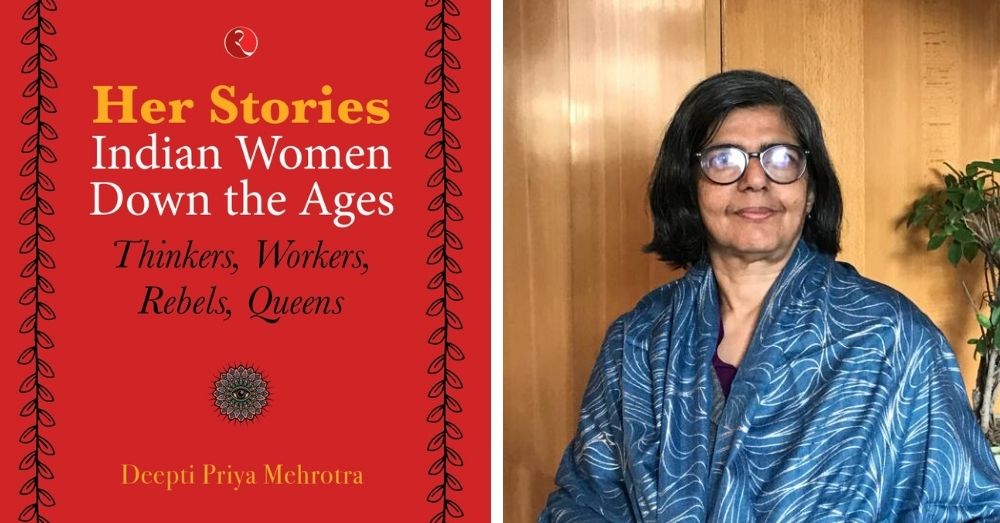 Lighting the spark of feminist consciousness, His stories by Deepti Priya Mehrotra, a political scientist with cross-disciplinary interests, is a saga of valiant accomplishing, rebellious, warrior and militant women who changed the tide of complacent human existence. This delivered celebrates the stories of women of forgotten glory, including: the philosopher Sulabha, the philanthropist Vishakha, the fearless Uppalavanna, the vigilante Leima Laisna, the astronomer Khona, the fearless Sultan Razia, the martial artist Unniyarcha, the poet- saint Janabai, the Gond Rani Durgavati, the Dalit rebel Nangeli and many others.

The story of ‘Didda: Mountain Queen’ is an extract from Her Stories.

Didda reigned in Kashmir for 50 years: nearly half as absolute ruler. She has earned the rare distinction of bringing stability to the grumpy kingdom. Didda’s father-in-law, Parvagupta, was a clerk until in 949 he killed King Sangramdeva and seized the throne, only to die within the year. His son Kshemagupta took over and proved as incapable as his young wife, Didda, was capable. Kshemagupta married Didda immediately after taking power, slyly calculating that his royal lineage would lend legitimacy to his rule.

Didda’s father was Simharaja, king of Lohara, and her maternal grandfather was Bhima Shah, a powerful ruler of Kabul and Gandhara. Didda was in her mid-twenties when she got married, later than the usual age of marriage, most likely because she had a disability. The historian Kalhana described her25 as “Charanhina” or without a foot—but she went everywhere, often carried away by Valga, a woman designated for this purpose. Didda already had a mind of her own and understood the affairs of statecraft well. While Kshemagupta spent his time drinking, gambling and hunting, Didda took over the reins of government in Srinagar. Coins minted during those years bore their common names – “Di-Kshema”.

Didda’s influence created enemies for him, such as Phalguna, the prime minister, whose daughter Chandralekha was also married to Kshemagupta. Didda gave birth to a son, Abhimanyu. His grandfather, Bhima Shahi, visited, meeting his little great-grandson and building a temple, Bhimakeshava. However, in 958, Kshemagupta contracted a violent fever during a jackal hunt and died.

The courtiers gathered for the funeral and pressured Didda to commit sati along with the other queens of Kshemagupta, including Chandralekha. Didda refused, arguing that she had to live to protect her son. Little Abhimanyu was crowned and Didda began to rule as regent. Didda and her son were surrounded by death threats. Kshemagupta’s sister’s sons Mahiman and Patala surrounded them at Padmasvamin’s temple with the intention of killing them, but Didda managed to turn the tide and assassinate them, bribing and placating their allies. Through military prowess and clever stratagem, she put down a revolt of the Damaras, feudal owners of Poonch and Rajouri, who were uniting against her.

Abhimanyu, having reached adulthood, took over from his mother. However, he died soon after (972), leaving behind three small sons. Didda regained power as regent. Abhimanyu’s eldest son, Nandigupta, was declared king, but died in 973; his younger brother Tribhuvangupta was crowned and Didda continued as regent. Two years later, Tribhuvangupta died and Didda crowned her youngest grandson, Bhimagupta. In 981 CE, Bhimagupta also died. It is often assumed that Didda had her grandsons killed, for power, although there is no evidence for this view. In any case, a ruler of her caliber should not have stepped down, handing over the kingdom to an inexperienced youth. Didda was a seasoned statesman, highly respected by the people.

Didda was a full monarch for 22 years (981-1004 CE). She crushed the rebellions that periodically arose, using a combination of appeasement and fierce retaliation. Kalhana remarked:

The lame queen, whom no one would have believed capable of stepping over a cow’s footprint, overcame a host of enemies just as Hanuman overcame the ocean… Traitor ministers who for 60 years had robbed 16 kings, from King Gopala to Abhimanyu, their dignity, lives and wealth were quickly wiped out by the energy of Queen Didda.

It is quite possible that the death of his son and grandsons was caused by illness or accidents; Didda was reportedly devastated by feelings of grief and loss. She built the Abhimanyusvam temple and the city of Abhimanyupura (Bimyan), to honor the memory of her son. In memory of Valga, her faithful servant, Didda built Valgamath. She built over 64 temples, rest houses, monasteries and cities, including the city of Diddapura and Diddamath (now the Diddmar region of Srinagar); and issued white metal and copper coins bearing the legend “Sri Didda”, as well as the goddess Arodoxsho, goddess of abundance.

Its prime minister and army commander, Tunga, served Didda well. He was of modest origin: shepherd of Poonch, she had promoted him out of turn. Extremely capable, he held these positions for nearly four decades, throughout the Didda regime, and thereafter as well. Much younger than her, he was said to be her lover; it was pure speculation rather than a proven fact. More power for her, though, in case there’s any truth to the rumor!

When Didda was in her late 70s, she decided to choose an heir. She summoned several boys from her birth family, placed a pile of fruit between them and asked them to collect as many as possible. The young people grabbed and fought, except for Samgramaraja, who simply incited the others to fight, and calmly gathered the spoils, ending up with the maximum number. Didda adopted Sangramaraja – son of her brother Udairaj, King of Lohara – and declared him her heir. She made Samgramaraja and Tunga swear that they would work together.

By grooming Samgramaraja for responsibility, Didda ensured a smooth transition of power – very rare at the time. Samgramaraja lived up to the trust placed in him and was able to maintain a stable kingdom, in part due to the strong army and administration he inherited from Didda. When Mahmud of Ghazni attacked Kashmir in 1015 and 1023, Samgramaraja was virtually the only king in India to repel him. The Lohara dynasty remained the seat of power in Kashmir for over three centuries.