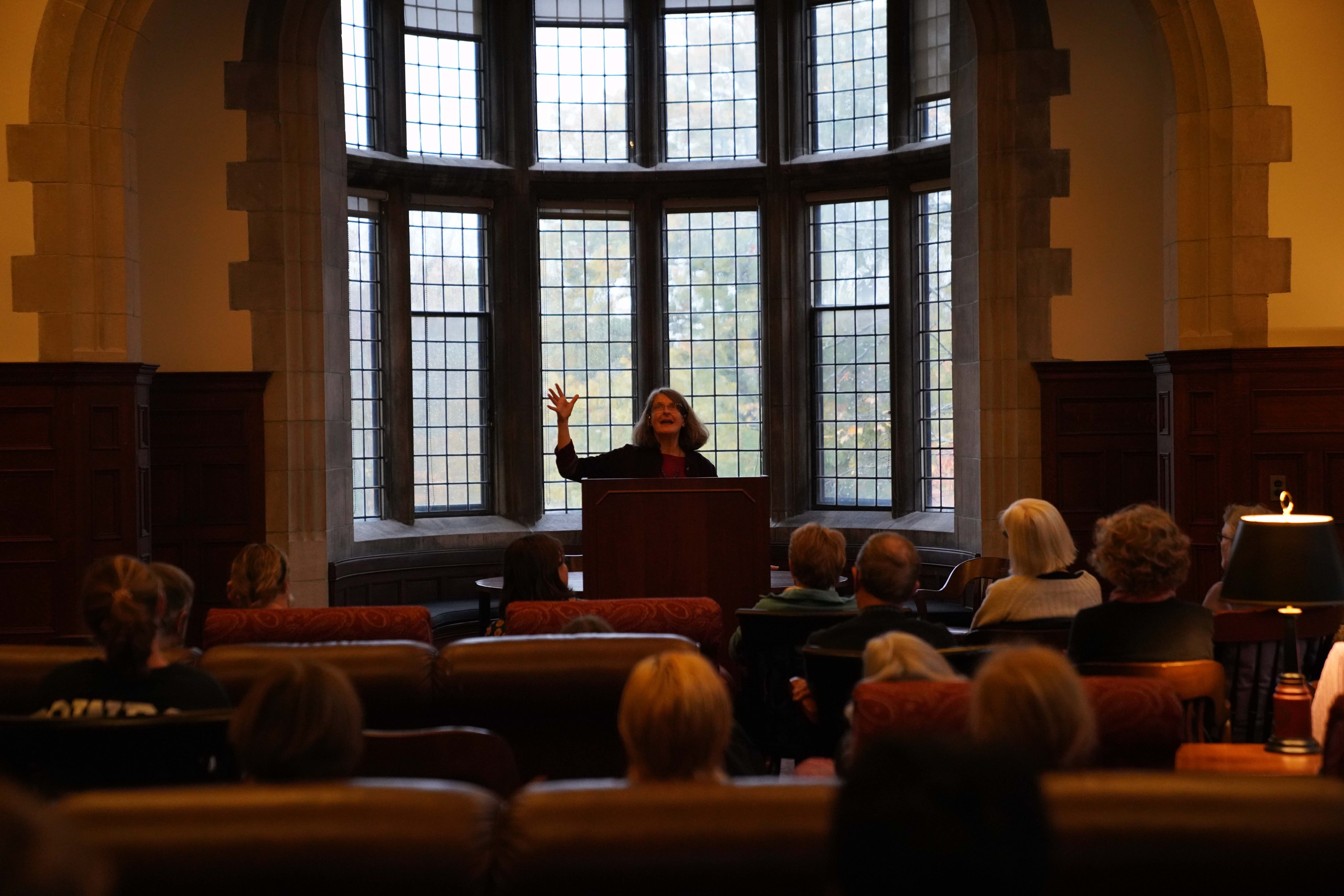 On Monday afternoon, members of the community gathered in the Thomas F. Shannon Room at Hubbard Hall for a reading of selected poems by Judith Sanders, award-winning poet and former visiting professor at Bowdoin. Her performance, which was sponsored by Lectures and Concerts, the English Department, Bowdoin’s Marine Science Semester and Environmental Studies Program, included poems from her recently released book “In Deep.” Her whimsical and engaging performance was interspersed with energetic bursts of song and candid banter about motherhood, travel, womanhood and life more broadly.

Audience members found Sanders’ performance to be full of intense energy and humor, his passion showing in every word and gesture. She added her unique flair and moves to poems such as “68 Dodge Coronet,” “The Bra Fitters Questionnaire,” and “Feeding the Horses at Crystal Spring Farm,” keeping her audience engaged from start to finish.

“I loved the way she performed the pieces,” visitor Lily Clurman said. “The images she conjured up were really striking: being on a bus in Italy or walking through a wood full of crisp leaves in the fall. Every poem she read to us had a storyline and even the really short ones had an element of narrative change, which helped me stay more engaged.

Sanders addressed many issues through his poetry – from the objectification of women and the pains of growing up, to gun violence and the struggles of parenthood. Even his saddest poems seem tinged with hope, highlighting the joy that lies hidden in life and the lessons we can all learn as we grow and change.

During the Q&A section that followed the reading, Sanders talked about how she developed her spirited reading style.

“I have an acting background, so I bring it out,” Sanders said. “I think I’m tired of going to poetry readings where there’s a drone voice, and then you can’t remember what you heard afterwards.”

Sanders discussed his writing process and evolution as a poet while answering another question.

“I wrote these poems just because I needed them and without expecting anyone else to read them, let alone get them published or heard,” Sanders said. .

She touched on the struggles as a modern writer and how she carves time out of her day to focus on writing.

“For the poems you heard, I have to generate loads and loads of horrible material,” she said with a laugh. “Then I winnow it down to the few lines you hear in the poem. Sometimes it takes me years to really understand what a poem is.…Since I started reading them aloud, I discovered new things in them that I didn’t know were there when I silently created them.

Sanders offered advice for writers struggling with deadlines and distractions.

“We live in the age of distraction,” Sanders said. “I wonder how Shakespeare would have written if he had a cell phone next to him. During your writing time, you are like a surgeon performing an operation or a priest saying mass. You wouldn’t interrupt the surgeon holding the knife, would you? You wouldn’t interrupt the priest raising the chalice.

Many of the poems in “In Deep” can be classified as “eco-poems”, as they focus on nature and draw attention to environmental issues and ethics. Associate English professor Elizabeth Muther, who organized the event, brought Sanders to her Maine Writers and the Environment class to discuss her work.

“I wanted to bring Judith Sanders to campus to do a reading because I’ve been following her work for years,” Muther wrote in an email to the Orient. “She’s an original, comedic and profound poet – with an enormous range of voice, tone and genre – and her writing often makes me laugh, cry or shiver with gratitude.”

His portrayal of the joys and sorrows of the human condition left some audience members with a new appreciation for the little things in life.

“I was so charmed,” said local Maine author and audience member Bunny McBride. “[The poems] are so tender, they are so everyday… filled with little details that you might miss if you weren’t a poet – if you weren’t an observer – and she is such an observer.