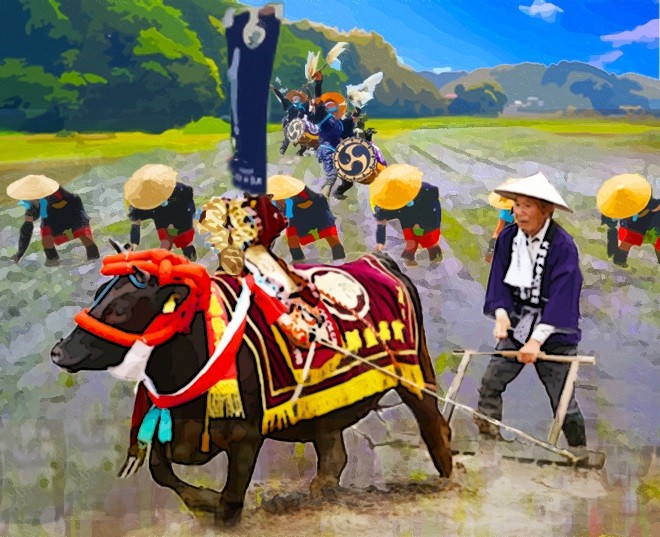 a walk in the field
raw asparagus by hand
wake the snakes
–Ljiljana Dobra (Sibenik, Croatia)

The haikuist smiled warmly and put on the facial expression of a blurry-eyed stone Buddha sitting in a flowery field. In the instant that followed, the solo dance performer relaxed her toes, feet and legs.

sunken legs
of my butoh dance
deepens the mist

Disheartened by a drier-than-usual Buddhist New Year water festival due to political unrest in Yangon, Myanmar, Hla Yin Mon said she was watching peaceful cherry blossom events in Japan instead. She wrote a haiku while vicariously watching videos online of the pink arch formed by rows of trees along a winding river that empties into Tokyo Bay. For the first time since the start of the pandemic, Xenia Tran was able to take a boat trip around Loch Ness, Scotland.

Ian Willey, professor of English at Kagawa University, woke up listening to the four-note opening motif of Beethoven’s Symphony No. 5.

before dawn
a channeling bird
Beethoven

Matsuo Basho recorded the first movements of grasshoppers, frogs and birds, as well as the budding, coloring and falling of leaves. Borrowing a verse from the tragic Noh play on the warrior “Sanemori” by Zeami Motokiyo (1363-1443), the master poet wrote in 1689: muzan ya na kabuto no shita no kirigirisu.

What cruelty!
trapped by a helmet–
Grasshopper

Writing from Kerala, India, Lakshmi Iyer would have liked to ask the master poet a question.

basho’s frog
was it
green?

Dejan Ivanovic prefers the way things were moving in Lazarevac, Serbia. Anna Goluba checked out a little neighbor in Warsaw, Poland, whom she wrote about in the April 29, 2016 issue of the Asahi Haikuist Network: Among the Green Blades His stubborn gaze…grasshopper.

Bamboo leaves–
the path of the green grasshoppers
used to jump

stone wall
the squirrel’s hideout
is no longer a secret

Scientists, naturalists, gardeners as well as members of the Royal Meteorological Society have tracked the evolution of plants and flowering patterns for over 200 years using a database known as Nature’s Calendar. Observing his lawn, Alan Summers noted: “Although robins are a symbol of Christmas in the UK, I saw even more robins as winter progressed into spring.”

robins everywhere
the white noise of winter
fades in spring

bleat sheep
in the green grass
waiting to be gathered

mountain glade
how grass disappears
in the cow’s mouth

Since last spring, climatologists from the Japan Meteorological Agency have renewed their way of phenologically observing animals and plants. The data collected assesses the rate at which the seasons change and measures the cultural significance of changes during the four seasons, including how climate change affects ecosystems. Satoru Kanematsu loves the idea of ​​rewilding his lawn and garden so native bees can pollinate dandelions and wisteria.

No mowing May
weeds in full bloom
bee feast

While weeding her garden, Masumi Orihara said she couldn’t help but think of the “buzz of plane attacks in Ukraine”.

nothing but honey
the buzz of air search
nothing but…

As Mother’s Day approaches, Giuliana Ravaglia wrote this haiku to express the passing time in Bologna.

leaf in the wind….
shadow noise
who leaves

In an essay called his Vain Thoughts on Literature, Shiki (1893) asked why the Japanese people had been inspired to write short poems: “Japanese and Chinese poems are mostly about nature. European and American poems mainly deal with human affairs. he asserted, reasoning, “Because the poems describing nature are simple and pure, they tend to be short. Because human affairs are complicated and confusing, poems about them tend to be long.

This pithy haiku by Teiichi Suzuki in Osaka was influenced by Basho and the Chinese poet Chuang Tzu (369 BC – 286 BC). Kanematsu visited the Higashiyama Zoo and Botanical Gardens in Nagoya.

Butterfly
on the broken helmet
reverie

inside the shelter
a sparrow follows me–
tremble on my shoulders

Janice Bostock (1942-2011) illustrated how nature’s light can guide humans through difficult times on the last three lines of this tanka which began “white heron / returned from feeding grounds”.

at dusk
light up the darkening sky
of my return trip

Read haiku by fireflies at http://www.asahi.com/ajw/special/haiku/. The next issue of the Asahi Haikuist Network will appear on May 20. Readers are invited to send haiku on postage stamps, on a postcard to David McMurray at Kagoshima International University, Sakanoue 8-34-1, Kagoshima, 891-0197, Japan, or by e-mail to [email protected]

David McMurray has been writing the Asahi Haikuist Network column since April 1995, first for Asahi Evening News. He is a member of the editorial board of Red Moon Anthology of English-Language Haiku, a columnist for the Haiku International Association, and editor of Teaching Assistance, a column in The Language Teacher of the Japan Association for Language Teaching (JALT).

McMurray is a professor of cross-cultural studies at Kagoshima International University where he lectures on international haiku. At the Doctoral School, he supervises students doing research on haiku. He is a corresponding school teacher of haiku in English for the Asahi Cultural Center in Tokyo.