Around India through its different breads | Food 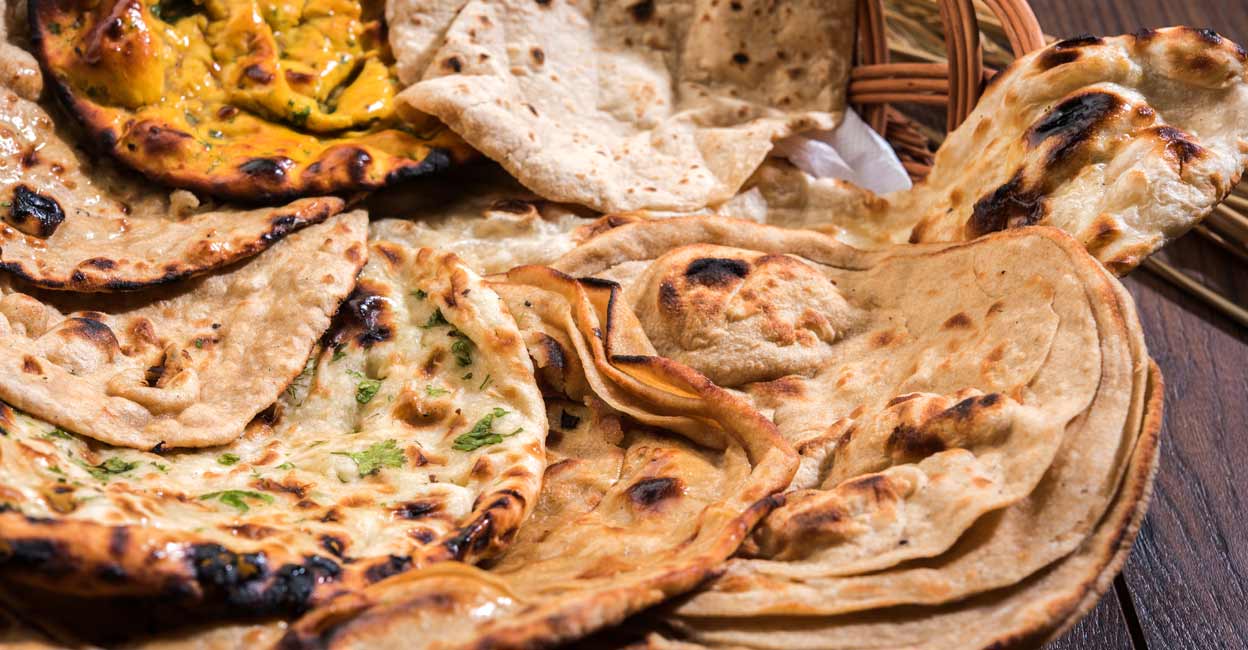 Indian bread plays an important role in our Indian cuisine and is eaten as a staple food in almost all of India. Did you know that there are around 30 different types of bread in India – each different from region to region, which are eaten for breakfast, as the main meal at lunch or dinner or even for tea? Our breads are an essential part of our meals; they also showcase the diversity and multicultural history of India through its different varieties, such as chapathi, roti, naan, thepla, kulcha and many more!

History of bread
Chapathis and rotis date back to the Harappan civilization in India. They are even mentioned in the Ram Charitamanas of Tulsidas in the 16th century, where it is said to resemble the katori it was served in and was known as ‘Rotika’. Naan is believed to have originated in Central Asia and found its first mention in the notes of the famous Persian poet Amir Khusrau in 1300 AD! And the “paratha” is mentioned in the 12th century Sanskrit encyclopedia Manasollasa, compiled by the then ruler of Karnataka, Someshwar III. A tasty past indeed!

Bread making
Most North Indian flatbreads are unleavened and made from flour like atta or maida mixed with water. Breads in places like Maharashtra and Karnataka are made from grains like jowar, ragi and bajra and are also known as Rotla (in Gujarat) and Bhakri (in Maharashtra).

Some breads or pancakes are made from lentils like urad and rice in South India. Some of these varieties include dosa, appam, and uthappam.

While most breads such as roti, kulcha, and chapathi are baked on a tava, breads such as puri and bhatura are fried, while others like appam are steamed, and Dosa is fried but not fried like puri.

Here is a brief description of some of the different types of Indian bread from across the country:

Naan
Naan is a sourdough flatbread made from maida. It is usually cooked in a tandoor but can also be baked. The naan is first brushed with melted butter before being served, and is usually accompanied by dal makhani, tandoori chicken and skewers.


appam
Appam is a fluffy, round-shaped pancake-like bread prepared with fermented rice batter and coconut and is commonly eaten in the state of Kerala. It is crispy on the edges and soft and thick in the center. It is usually eaten with a vegetable stew made with coconut milk, avial and korma.


Bhatura
Bhatura is a fried sourdough bread made with maida and (with or without) yeast. It is traditionally enjoyed with chole (chickpea curry) in northern India.


dose
Dosa is a rice and lentil pancake made with fermented rice and lentil paste. It can be eaten plain or with a potato stuffing, and is usually accompanied by sambar (lentil curry) and coconut chutney. Dosa is a staple food in many South Indian homes.


Roti/Chapathi
While rice is considered the staple food in eastern and southern India, roti is the staple bread of northern India. It is unleavened, made with whole wheat flour (atta) and baked on a tawa. Roti is usually accompanied by a wide variety of vegetables and curries.


Paratha
Paratha is a layered, flaky flatbread that is usually a breakfast staple in northern India. Parathas can be plain or stuffed with potatoes, cauliflower, paneer or onions. This tasty and rather substantial bread is usually served with a bowl of curd and pickle.


Thepla
Consumed for breakfast in Gujarat, thepla is another delicious flatbread made from wheat flour, gram or millet flour, spices and vegetables like fenugreek leaves and bottle gourd.


Poori
Traditionally used on special occasions and festivals, Poori is a crispy, puffy fried unleavened flatbread made from whole wheat flour in northern India and maida in eastern India, where it is also known as luchi. Poori is traditionally served with potato curry, chickpea curry or Kosha Mangsho in Bengal.


Porotta
Popular in Kerala is porotta, also known as Malabar Porotta as it originated from the Malabar coastal region. It is a layered flatbread made from maida and is similar to North Indian laccha paratha. Malabar paratha, however, is much silkier and lighter than laccha paratha because eggs or milk are used instead of water in the kneading process. This flaky bread is usually served with meat curries and vegetable kormas.


Kulcha
Like naan, kulcha is a sourdough bread made with maida and leavened with yogurt or baking powder. Kulcha can be made on tawa instead of tandoor and is usually served with potato or chickpea curry.

poi
Similar to pita breads, this bread was introduced to Goa by the Portuguese. This brown-colored, chewy sourdough bread has a crispy outer layer and a hollow cavity that is usually stuffed with Goan Chorizo ​​sausage and is served with side dishes like Chicken Cafreal.

Transparent
The origin of Sheermal dates back to Persia. It is a sweet milk bread made with ghee, flour, milk, saffron and yeast. The Sheermal is cooked in a tandoor which is often sprinkled with milk to make the Sheermal soft and aromatic. Sheermal is mainly eaten in places like Lucknow, Hyderabad, Kashmir and parts of Delhi and is accompanied by kebabs and Niharis.


Bhakri
An important part of Maharashtrian cuisine, bhakri is made from millets like jowar and ragi. Wheat or rice flour can also be mixed with ghee and cumin seeds to make bhakris. This bread is traditionally served with various chutneys or with an eggplant curry.

Pathiri
Similar to appam, pathiri is also popularly eaten in Kerala. This pancake-style unleavened flatbread is made with rice flour, oil, salt and water. This white bread is light and paper-thin and usually served with mutton/beef and fish curry.


Litti
A traditional dish of Bihar and Jharkhand, these are whole wheat dumplings stuffed with sattu (roasted chana dal flour) and various spices, then roasted and mixed with ghee. Litti is similar to Rajasthani bati and is traditionally served with spicy chokha (mashed potato and spicy).

Kachori
Like Poori, kachori is stuffed with vegetables and spices and made with wheat flour, chickpea flour, lentils and spices. Kachori has a flaky, crispy outer crust and is fried. It is usually enjoyed for breakfast in northern India, especially in Rajasthan.

Built
Bati is a hard unleavened bread made in places like Rajasthan, Uttar Pradesh and Madhya Pradesh. It is made from wheat flour, salt, ghee and very little water and is traditionally cooked over smoked dried cow dung. Bati is traditionally served with dal, which combined gives us the famous dish dal bati.

Thalipeeth
Thalipeeth is a savory multi-grain unleavened flatbread that is popular in Maharashtra. Thalipeeth is made from various grains like rice, wheat, bajra and jowar and with legumes and spices like cumin seeds and coriander. This version of the bread is usually served with butter, ghee or curd.


How many different types of bread have you tried from the list above? Try each type as you can and let us know your favorite among them!