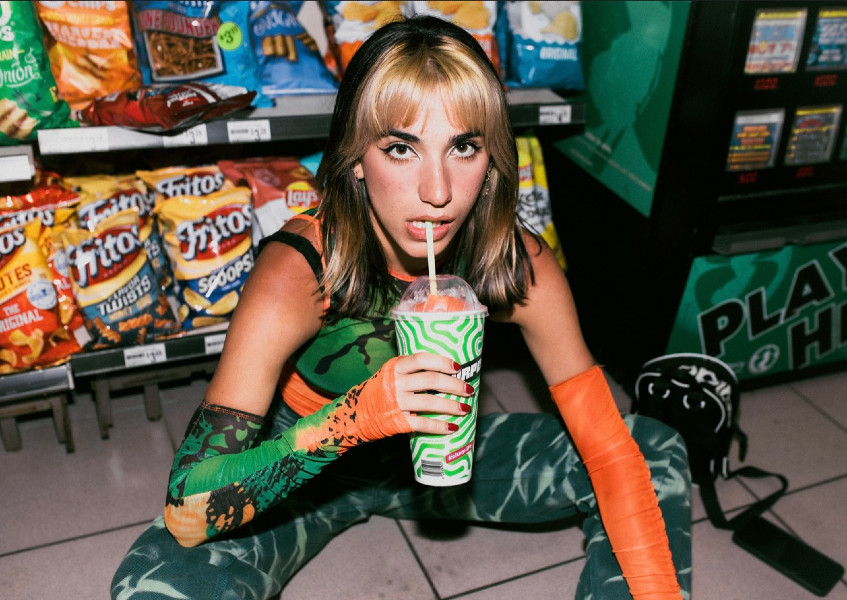 Pop/R&B singer-songwriter and producer Anna Thoresen releases her new single, “Party Girl’s Lament,” a track taken from her upcoming debut EP, which is due out later this year.

Speaking of “Party Girl’s Lament,” Anna Thoresen says, “It comes from a very vulnerable and personal place that I don’t often talk about, but that screams through my music. It’s about addiction, anxiety, and being in a dark place, and everyone around you isn’t too different, but nobody really talks about it. Addiction is far more common than you might think, especially among underage high school and college kids, and no one talks about it without feeling shame or guilt. I would like to break the stigma by talking about my own experiences.

Originally from New Jersey, and now based in New York, Anna fell in love with music and performing at age 10, participating in musical theater and choir. Later, in college, she recorded her first single, “I Think This Is Love?”

CelebMix sat down with Anna Thoresen to learn more about the person behind the music, his influences, and his writing and recording process.

What are three things you can’t live without?

This is honestly a very difficult question because I’m super indecisive, but I guess I should definitely say my laptop, Taki’s and Aquaphor’s. If I didn’t have my laptop, I couldn’t make my music; if I didn’t have Taki I don’t know what I would do and if I didn’t have Aquaphor I would be crispy, so I feel like I have to deal with those three things.

Honestly, it all came together by accident. My friend Matt sent me the guitar loop that’s used in the song, and I immediately fell in love with it. There was this vibe, this sad feeling that I really liked and so, I went through my journal of poems and lyrics that I have and found a few different lines in different songs that I thought were okay together I changed some things and I ended up with the first verse and the chorus, and I had to go on. A lot of the songs I write are about love or addiction so it wasn’t too hard to get inspiration from my different songs and poems.

Tell us about your state of mind when you entered the studio to record the album.

So I record all my music on my desk at home, I’ve recorded in a real studio before. Since I’m the producer, I really don’t have any pressure to do anything within a certain amount of time and have to be really picky with my voice to make sure it sounds exactly how I want it to sound. I’ve never worked with another producer before, so my mindset was just to have fun and do something I loved and was proud of.

“Party Girl’s Lament” is taken from your upcoming EP. What can you share about the PE?

I can say that I will produce/write it and plan to release it by the end of 2022, and I can say that you can expect a new pop/R&B sound with lots of harmonies. You can expect me to write on similar themes to “Party Girl’s Lament” and my debut single, “I Think This Is Love?”

How did you start music?

I’ve always loved music and wanted to be a singer, but I never pursued that dream until almost two years ago. I’ve done musical theater most of my life and went to school to do theater so I had been focusing on that side of the entertainment world for a while but got bored of it eventually for a while and started writing music to give myself a break. I ended up loving it a lot more and now I’m finally starting to pursue music and couldn’t be happier to do so.

Which singers/musicians have influenced your sound?

This one is tough because there are honestly so many artists that I really look up to and feel influenced by my sound. In the house, my mom played a lot of Frank Sinatra, Dean Martin and other iconic jazz artists and my dad loved listening to 80s rock bands like Journey and The Police. Even though neither of my parents sing, they did a really good job giving me a good musical education, they made me listen to a lot of different genres of music growing up and showed me all the iconic artists and songs of the past. Now I would say I found some of my own influences, like Lauryn Hill, Amy Winehouse, Alanis Morissette, Janis Joplin and many more.

If you had to explain your sound to the uninitiated, what would you say?

I would say my sound is a mix of pop and R&B, and I sing about things that are really important to me. My songs are vibrant and relaxing, and the goal of my music is to have a new sound with a nostalgic feel. I hope that comes through in my music when people listen.

Did your sound evolve naturally or did you deliberately push it in a certain direction?

I would say that I evolved it naturally and it is still evolving. I actually tried pushing my sound in a completely different direction several times just to figure out what my sound was, and each time I came back to the same thing. I think it’s important especially when you start experimenting with all kinds of music and singing different things just to see what you like best about yourself and your voice. Something I’ve learned is that generally the music that appeals to you the most is the music that suits you best, and when you go with the flow and have fun in the process, you make so many discoveries on yourself.

What inspires your writing? Are you inspired by poetry, music or other media?

I am inspired by everything around me. Music, movies, art, things I see on social media, and even just hanging out for 20 minutes, anything can happen that inspires my writing. I just like to keep an open mind and not judge myself when I write. I like to tell myself that nothing is set in stone, so I try not to put pressure on myself to get the final draft the first time. My favorite thing in the world besides singing is writing, and I feel like it’s a great form of self-expression. It helps clear my head and I’ve found that the more I let go and write how I feel, the deeper and better my writing starts to get. Also, challenging yourself and writing about something or someone you wouldn’t normally do can be a lot of fun, anything that pushes you out of your comfort zone is awesome.

When I write, I either just find a few lines/a general idea and come back to it later, or I end up just spouting out a word almost like a journal entry just so I can get the idea and feeling out of me and I refine later. Like I said earlier, I like to keep an open mind when I write because I find things flow more easily for me now that I have confidence in myself. There are a lot more songs in my diary/on my phone that will never see the light of day than there are songs that I will actually release, so I don’t get too discouraged when I have the blockage of the writer, or something is wrong it’s not going the way I thought it would. When it comes to melodies, I usually come up with them after having some kind of instrumental, and I do the same thing I do with my lyrics. I try different melodies and see what flows, and sometimes I end up changing things far in the writing process just because I find something that sounds better.

Which artists do you think are killing it right now?

I feel like there’s honestly a lot of artists doing really well right now, I just saw Alanis Morissette live a few weeks ago for her Jagged Little Pill 25th anniversary tour and she was absolutely stunning. I think for someone who is a mother of three and has been performing for over 25 years, her voice was in such good condition and it sounds the same as on the album. Also, I think Remi Wolf doesn’t get as much credit as she deserves, I love her music and I admire her a lot. And obviously Beyonce, ‘Renaissance’ is absolutely crazy.

how do you define success?

I define success as doing what you love in life and having a happy, balanced life outside of it. I don’t think being the most famous person in the world means you’re successful, quite honestly, I think being famous is the same as just being popular, and I don’t think being popular make you successful, it’s just makes you popular. My dream is to be able to play and make music for a living while being able to maintain a balanced social and family life.

What can listeners expect over the next six months? New material? Live concerts? Videos?

Listeners can expect a new EP by the end of the year, a few more on my YouTube channel, and live gigs to come! I’ll be sure to announce everything I do on my social media accounts, so be sure to keep an eye out for that. Expect surprises too!