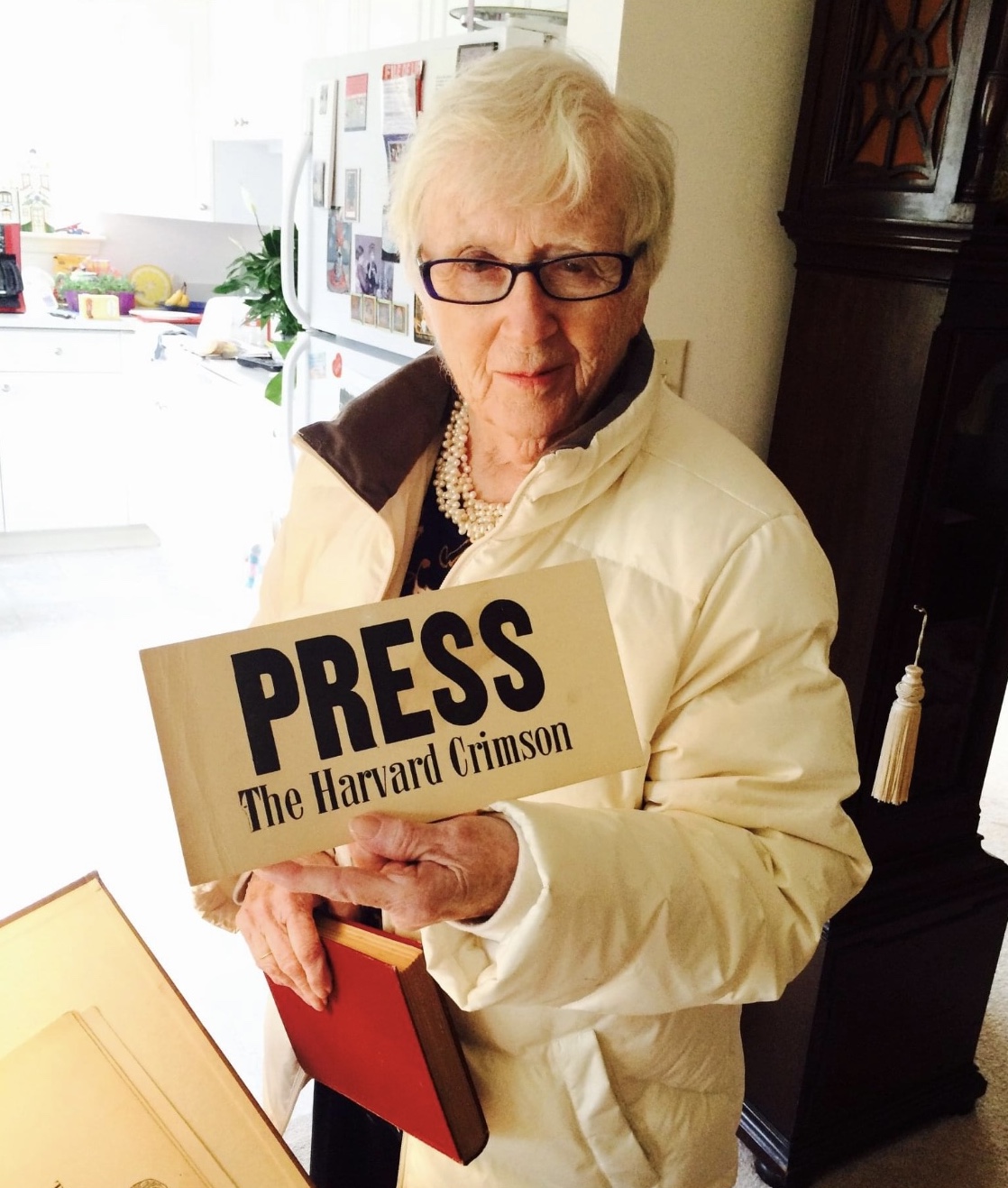 Joan McPartlin Mahoney ’49, Harvard Crimson’s first female reporter, loved working in the newspaper’s newsroom at 14 Plympton St. But there was one thing she despised about the job: leaving.

Mahoney was forced to leave The Crimson at 9 p.m. because men and women were not allowed to be together without a chaperone past that time.

“She always hated it, because that’s when some of the really deep conversations about editorial work were going on,” Mahoney’s daughter Ellen Mahoney said. “She was like, ‘Rats, we were just rolling.

A career reporter who went on to report for the Boston Globe after serving as Radcliffe College’s first correspondent for The Crimson, Joan Mahoney died at age 94 on July 22 at her home in Brimfield, Mass.

Joan McPartlin was born in Cambridge on May 1, 1928. She graduated from high school at Cambridge Rindge & Latin School, where she got her start in journalism writing for her high school newspaper and freelancing for the Globe.

“It was time to cover Radcliffe, not just joke about it”

Mahoney became The Crimson’s first female reporter in 1947 after spending the summer working alongside Crimson editors at the Globe and urging them to report on Radcliffe.

“In 1943, Harvard and Radcliffe had agreed to a joint education system, which brought Radcliffe’s daughters into Harvard classrooms for the first time in college history,” Mahoney said. wrote in the Boston Globe in 1973. “It was time to cover Radcliffe, not just joke about it.”

Crimson president Raquel Coronell Uribe ’22-’23 wrote in an emailed statement that she was “deeply saddened by the loss of Joan McPartlin Mahoney.”

“She was so ahead of her time as such a progressive woman,” he said.

Susan D. Chira ’80, the second woman to serve as president of The Crimson, said she believes celebrating Mahoney’s life and reflecting on the obstacles she faced before becoming The Crimson’s first female journalist. Crimson is a “commemoration of the important role she played”.

“It’s a tribute to her that my friends and I can walk into 14 Plympton and not feel weird,” Chira said. “And being like ‘OK, we belong here, just like the guys. “”

Coronell Uribe wrote that The Crimson owes Joan Mahoney “much gratitude for leading the way in gender equity”.

“Joan struggled to fight to be part of an organization that didn’t value her enough,” she wrote. “Through its pioneering work, The Crimson now identifies two-thirds as women, a figure that is reflected in our masthead and leadership.”

Jim Mahoney said his mother was “tremendously proud” to be The Crimson’s first female reporter.

Mahoney did not receive an invitation to The Crimson’s 100th anniversary celebration, held in 1973. Robert W. Decherd ’73, the president of The Crimson at the time of the anniversary, said Mahoney and others hadn’t received an invitation because the newspaper “had no record of them.

Mahoney criticized The Crimson for not inviting her to the ceremony in an article published in the Boston Globe that year.

“Even after 25 years, the memories are warm, as is the feeling that we at Crimson’s Radcliffe Bureau were a band of spirited, valiant pioneers,” Mahoney wrote in the Globe. “So I was shocked to be expelled from the party.”

Mahoney also criticized Decherd’s explanation at the time that The Crimson alumni’s poor records prevented him from receiving an initiation.

“But it gives me an idea,” she wrote. “How about that, all of us Crimson remnants?” How about a party just for us? Anyone want to start one? »

“If so, put me on the list and mark me ‘Radcliffe’s First Correspondent,'” Mahoney wrote.

Decherd said “it’s very unfortunate and disappointing” that Mahoney and others weren’t added to The Crimson records until after the centenary.

“But we made every effort after that — through Joan and others — to make sure they were added to the list of people who helped build The Crimson,” Decherd said.

Coronell Uribe said the newspaper intended to commemorate Mahoney when celebrating his 150th birthday in 2023.

After graduating from Radcliffe College in 1949, Mahoney began working full time as a reporter for the Boston Globe. She then met her husband, Gerald Francis “Frank” Mahoney, at the Globe, where he also worked as a journalist.

After their marriage, Ellen Mahoney said that the nepotism policies of The Globe at the time led her mother to resign from the paper to allow Frank Mahoney to pursue his career there.

“As she was about to resign, the editor at the time said, ‘You know, you’re the best writer. I’m sorry it’s you and not Frank,” Ellen Mahoney said. “My father is the one who always told this story.”

While Mahoney ended her career as a full-time journalist to raise her three children—Jim, Ellen, and Gail—she didn’t quit journalism entirely. When her children were older, Mahoney worked as a freelancer, again for the Globe.

Jim Mahoney, who worked as a photojournalist at the Boston Herald for nearly four decades, said his mother always enjoyed having conversations about journalism and reporting.

In the aftermath of 9/11, most parents hoped their children would stay as far away from Ground Zero as possible. But a full day after the attack, when Jim Mahoney finally got enough cell phone service to call his mother from New York and tell her he was there photographing the destruction, she said, “Oh, God, I was hoping you were there. “, he recalls.

She then “transformed into a journalist” and began asking him questions about Ground Zero and describing his surroundings, Jim Mahoney said.

“We’ve fallen back into an almost professional role as a stage reporter or stage photographer, and there’s Ma back in the rewrite desk,” he said. “Take the quotes, make a story out of them.”

She regularly donated to the newspaper’s financial aid program, which provides financial compensation to eligible students. Mahoney recently backed the program in 2021, attaching a note with her contribution that read, “First girl to cover Radcliffe for The Crimson (1947-1949).”

She was proud of her pioneering role at The Crimson, writing in the 1973 Globe article, “Still a very good title to have held.”