A review of Save Us 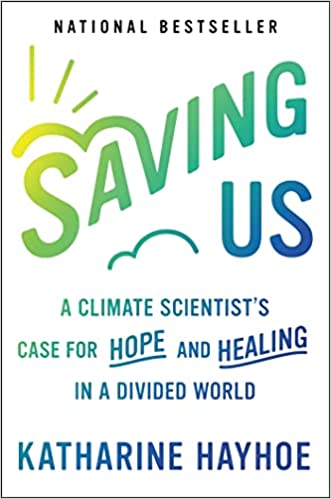 For Christian climate scientist Katharine Hayhoe, the most important thing we can do to fight climate change is to talk about it. In To save usHayhoe outlines some strategies for doing this, while reminding us why it matters.

When I first picked up this book, I was skeptical that talking about climate change could have any real impact. After so many climate summits that have failed to produce the necessary results, talks seem particularly cheap. But this is precisely the attitude that Hayhoe is trying to resist. Just as the problem of climate change has many layers, from the decisions of big fossil fuel companies to our personal consumption habits, the solution is also multifaceted, with a need to take root in corporate boardrooms and meetings. of the city council as well as in our own homes. . Talking is where change begins, insists Hayhoe. This is particularly important because, according to recent polls she cites, a quarter of Americans in the United States still do not consider climate change a serious concern.

No one can deny the importance of facts. “We all know that if someone says ‘gravity isn’t real’ and comes down off a cliff, they come down whether they ‘believe’ it or not,” says Hayhoe. But unfortunately, we are less sensitive to facts that affect our identity, our ideology and our morality, especially if they ask us to change our behavior and our way of life in ways that we would rather not. Discussing the large number of highly educated and scientifically literate people who deny that climate change is man-made, Hayhoe introduces the idea of ​​reasoned reasoning:

When you want to believe something. . . we ask ourselves “Can I believe this? and we are looking for supporting evidence. When we don’t want to believe something, we ask, “Should I believe it?” and we are looking for evidence to the contrary. We everything engage in this type of reasoned reasoning when our identity is at stake, even when the stakes are relatively low.

Hayhoe debunks the many “zombie arguments” to which those who reject human-caused climate change prefer to turn: that the changes we see are due to orbital cycles or variations in the brightness of the sun, which volcanic eruptions produce more carbon pollution than us. She reminds us that since the 1850s, scientists have known that our carbon emissions trap heat. However, as obvious as the facts may be, many people are reluctant to hear them. They fear government excesses that might force them to stop flying in airplanes or using wood stoves; they also become resistant to any message hinting at guilt and shame. No one wants to be told they’re a bad person, and such messages tend to cement people more firmly in the opinions they already have.

As an alternative, Hayhoe suggests that discussions about climate change should start with finding commonalities. She describes a time when she was invited to speak to a group of conservative business leaders at the Rotary Club near Lubbock, Texas, where she lives. When she entered the gathering, she noticed a banner that advertised a “four-way test” and then the club’s guiding principles. To assess the value of a speech or action, Rotarians ask, “Is it true? Is it right? Will it build goodwill and a better friendship? Is it beneficial for everyone involved? »

Hayhoe immediately reorganized his speech around this four-way test to demonstrate the truth of climate change; its inherent injustice, especially towards the world’s poorest; and the resulting shared benefits. As she did, she found listeners uncrossing their arms, leaning forward, and beginning to nod their heads. After the discussion, a local businessman said he had never given much thought to climate change until she made him consider it in light of his Rotary values.

Similarly, Hayhoe argues that we can all discuss climate change by focusing on what is collectively dear to us. We can start with the local challenges facing the places we live, our concerns for our children’s future, or what we love to do, whether it’s hiking, hunting, snowmobiling, or good food and good drink, all of which are under threat as the world heats up. She urges us to cite surprising sources, such as business leaders (like the CEO of Unilever, who says all companies should aim for net-zero emissions) or military leaders (like Admiral Samuel Locklear, who views climate change as a threat to national security).

Throughout the book, Hayhoe adds a suggestion that is not often put forward in the discourse of the environmental movement: bringing faith into the conversation. She insists that concern for the land is essential to a Christian worldview:

If Christians truly believe that we have been given responsibility – “dominion” – over everything that lives on this planet, as it says at the very beginning of Genesis, then we will not just objectively care about climate change . We will be at the forefront of demanding action because it is our God-given responsibility to do so. Not caring about climate change is a failure to love. What could be more Christian than being good stewards of the planet and loving our neighbor as ourselves?

Hearing a climate scientist invoke faith is just as refreshing as hearing religious leaders like Pope Francis urge us to take action on climate change.

Hayhoe’s Christian commitment sets her apart from other conservationists in several ways. Some elements of the environmental movement may come across as anti-human, such as activists who argue that limiting population growth is the only option. Hayhoe, on the other hand, responds that the focus should be on educating and empowering women globally (which correlates with having fewer children) and on reducing consumption in wealthier countries (where population growth is lower but carbon emissions are much higher). “It’s not about giving women less choice; it gives them more,” she wrote. “The approach of applying control also ignores the fact that the world’s resources are not being used equally or fairly.”

Likewise, while Hayhoe does not at all gloss over the dire situation we find ourselves in, she takes a Christian approach in urging us to focus on hope rather than despair. Rather than let fear paralyze us, we are called to act, individually and collectively, to change our own consumption habits and inspire our political leaders to adopt better policies. By finding like-minded people, we gain support and can make a difference as a community. By the end of the book, I was persuaded by his argument that the conversation is where it begins – and I was grateful that Hayhoe equipped us to have those conversations.