A poetic journey in a daydream 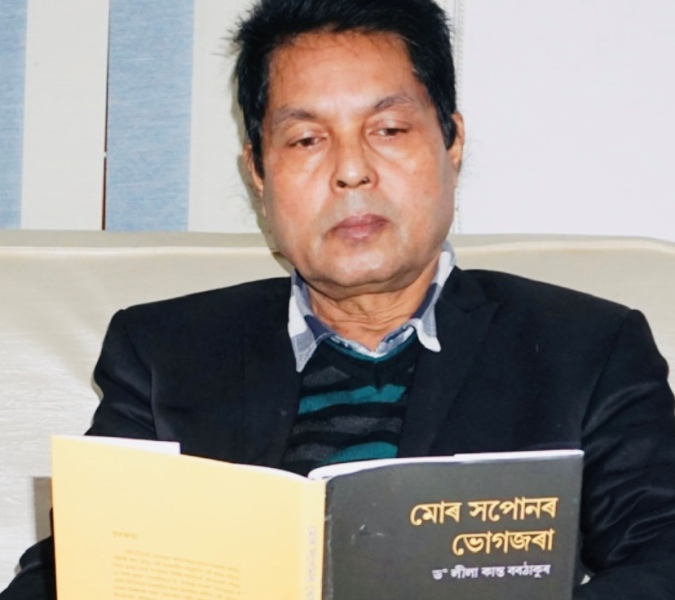 Cecil Day Lewis once wrote: “Poetry is not, except in a very limited sense, a form of self-expression. Who on earth assumes that the pearl expresses the oyster, “Therefore Purbanchal Prakash, who usually publishes serious books of literature, has done a wonderful job in finally coming up with a volume of poetry in the Assamese Dr. Leela Kanta Borthakur . Sapunor Bhogjara Wall which reached me only a few days ago to surprise me because it was not written by a long-time poet but by an eminent academician who is an administrator always dynamic as a director of a college of Assam.

Read poem after poem in this book written by the ever worthy person who is an aesthetic ride all the way because she gives us a rainbow tint of life, sometimes a deep dip in the sea of ​​pain, a another time wading in the river of joy. The odyssey of sadness becomes poetic when the poet, being a current scientific man, observes life through the microscope of reason and intellect.

Not all of the poems are magic songs reflecting the Shelleyan image of life as a bed of roses, but some are rather Zolaesque images of life’s test-tube reactions. Orhan Pamuk once said “When a good poet is faced with difficult facts which he knows to be true but which are also hostile to poetry, he has no choice but to flee to the margins, it was …that very retreat that allowed him to hear the hidden music that is the source of all art.

This is exactly how we feel in the poems in this book. One such poem is on “Lockdown and College and Myself” where he writes “Through the wreckage of all my life / Silence led me / And the threshold opens.” The words here will enchant readers with the effect of an imagery hanging up the locks of a troubled time. Dr. Leela Kanta, in her poetic debut, carved out a place for herself as an Assamese poet who has much to contribute to Assamese poetic literature. A man of the world of science sings here of the sun and the blood.

In his second poem “Time Death etc”, he speaks of an “eternal bond” by relating it to the chirping of a bird. A poem is about the legendary figure of Assamese literature Homen Borgohain where it beautifully explains how the great writer “opens the door of his heart to make and remake in the city of stars and moonlight”.

The poet visualizes spring in trees and cuckoo clocks. A poet is an evergreen spirit and the poet wants to run away with the maiden to the rough sea to feel the dashing emotions only to find out the house of God. This mixture of religion and aesthetics reminds us of pre-Raphaelite poets like Rossetti, something very few Assamese poets did in their romantic poetry. Sometimes it is drenched in the relentless monsoon.

He is waiting for his treasure box to be reopened. so that any perfume in it is untrammeled. Each poem has its own flavor. In the poem ‘Tumi Protik Pragatir’ he pays homage to teachers in the ever symbolic images of a white river flowing under the azure sky. He describes how dreams evaporate. But in the other poem, ‘Mor Aponar Ghar’, he dreams of the country of Fidel Castro or the Walls of China.

He imagines in a surreal way how his poem dialogues with the Taj Mahal or the right nose of the always beautiful Cleopatra. Yet the poet never ceases to pursue his search for Immorality and he speaks in sonorous silence: “Tomar bukut / Mor Unthor Amrita Sandhan” and such lines abound in the poem giving a unique side to the romantic tone in a way mystical. . Anyone who cares about the well-being of the society around him cannot sleep peacefully. This concern is majestically reflected in his poem when he writes ‘Aji kali more tuponi bor kamkoi ahe, /jimane nixa hoi ahe / Phensar new new sabdabur spsasto hoi ahe…’

An eerie feeling sets the tone of the poem and here the supernatural not only haunts but overlaps it. In her reflections we hear the cries of a mother who has lost her child and the line comes as a refrain in the old English elegies ‘Ai mor bhoi hoi’ (Mother I am afraid). The titular poem ‘Mor Sapunor Bhogjara’ portrays his star universe and the bold voice of the poet resounds: Kabitaro ston ase/ Ache astoron’ and he feels the thrill so intensely. Poems like ‘Dag’ have realistic overtones so faithfully portrayed “Valley after valley I hoist the flag / To announce / There’s no more storm or rain in my pictures”.

The evening is a woman in his poems like “Priyotama Sandhya” “Mor priyotoma Sandhya / Tomar Mrityur pisote / Mahashantire me jironi lou / An ekhon ronor babe” This personalization of nature is another new aspect of Assamese poetry. The poet’s optimism is never lost in the chaotic time and the poem “Axha” gives us the image of a flickering lamp. He can also dream of a rose. But his identity revealed in ‘Mur Porichoy’ never denies the conditions of death. Some poems give us nostalgia for the personal life of the poet and in his journey in the past he tries to analyze the different stages of his failure although in a poem ‘Muloi thoi gol ji’ he discovers in his palm a star of ‘or ‘ejak sonowali tora’.

The poet being the head of the institution sometimes does his professional duties by paying homage to the memory of a talented colleague like Dr. Himangshu Sharma as in the poem ‘Surujor Sushama’, where he imagines the ‘ceaseless flow of efflorescence golden of the sun.” The poet overcomes his despair when his heart flares up “Endharor bauna hridayat lagil jui”. This kind of poem allows readers to trace the romantic flashes in the mind of the poet who falls on the thorns of life to bleed.

He then gives an account of his life he lived in the past and invites readers to review the events ‘Mor ghat loi ahiba/ xakalo bujai kom/ gamosai sokulo tuke kenekoi’ This image of traditional gamosa gives the poem a poetically rare intensity in a confessional poem like that of Emily Dickinson. Her poetry is realistic but never becomes overtly political as Allen Ginsberg wrote; her poetry is “not an expression of the party line. This is that hour of at night, lying in bed, thinking about what you really think; making the private world public, that’s what the poet does.

Although a poetic beginning, this book will capture the reader’s imagination more by suggestion than by direct statement. Half-revealed and half-hidden ideas to give any poem its deeper connotation and after reading Dr. Leela Kanta Borthakur’s poems, one can feel it in abundance. The printing is error free and distinct due to the high level editing properties coupled with the book cover art design by Manojit Rajkhowa. Assamese literature is increasingly in need of such poems in the coming days.

Dr. Ratan Bhattacharjee is an academician and poet. He can be contacted at [email protected]