A poet of love and revolution 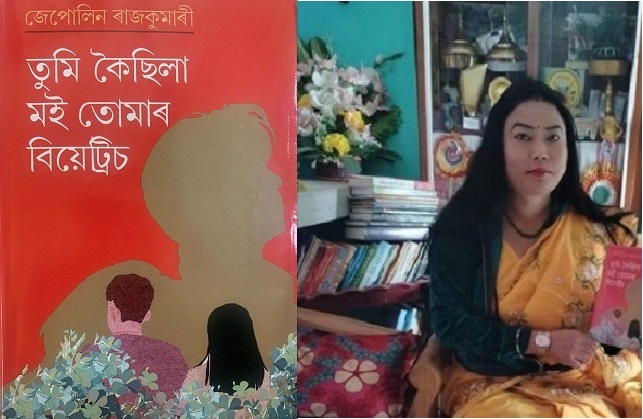 WH Auden once said: “A poet is, above all, a person who is passionately in love with language. The moment I received Jepolin Rajkumari’s sixth poetry volume, I fell in love with his vocabulary which is in the best order and matches the content of his poems. She is a prolific poet and writer of innate creative talent with incredible social reformer zeal and positive vibes and now it is a privilege for all to know that this poet from Assam is once again recognized by the government of Assam.

His poetic beginnings were Dichangporiya Ratani Mefollowed by Chamiyana, dapon Phoenix and Bhogjara each revealing his poetic work. Now she comes with her sixth book Tumi Koisila – Me Tomar Beatrice‘ published by Protisruti Prakashan. This poetry by Beatrice of Assamais Love enchanted the readers of Chamiyanain 2000 where her poetic ecstasy stuns the poetic world to surely reach greater audiences and admirers and since then over the past two decades her golden pen has inked more of 500 poems on love and life.

A serious social thinker like her simultaneously wrote essays for books like ‘dapon‘ as early as 2016 which was a living social document reflecting his deep insight into society and the burning issues of his time ‘Dichungporiya Ratani Me‘published in 2018. Phoenix(2019) was her third anthology released in 2019. A dynamic personality revealing her penchant for Bihu dance, she also etched her name in the hearts of the public as a singer.

Ujjayaniis another poetic stage accepted by poetically minded readers for their beautiful images and ideas. These poetic volumes are collectible poems in which she raised deep questions about life in notable poems such as Jajabori Jibon, Dushapno, Rod e Pora Neelachal, Poti-Potni, Achol Manuh, Kobitar Mahasabha, Nari Kiyo Eti Karun Bahi , Kencha Ghar Jwalanto Jui, etc. Until today, his unpublished poems have reached almost 600 and those published are like one eighth of a huge poetic iceberg.

The unbearable truth is painful like fresh wounds, she says in one of her poems. In another poem, she compares old houses to past memories. The cult of green leaves is the secret of his poetic energy. Sometimes she expresses aloud the anguish of a feminine heart. A maximum of feelings in a minimum of words is the sine qua non of his poetic style which gives his poems a new dimension. Sometimes her mind becomes romantic where she imagines herself in the image of Radha where she listens to her lover’s flute in the colorful arbor.

In the sixth book, his poems have reached a mature stage of lyrical expression. The book begins with ‘Your love and my love’ (Tomar Prem, Mor Prem), a poem where she brings the comparison of male and female spirits reacting to love. In her poem, she refers to Oinitam a festive song of the Mishing Bihu thus emphasizing the tribal heritage.

This is combined with his modern reflection on the image of Cleopatra in one of his poems. Again, she imagines the Mississippi or the Amazon or the Kanchenjungha and the Chinese wall to explain the width and the height of its depth. “You are Marc Antoine, I am Cleopatra”.

What a simple yet profound statement from the depths of his heart. She discovers the limitless horizon of the firmament in her love. In another poem, she speaks of the moonlit night for the celebration of love. In one poem, she expects her lover to give her a bouquet of flowers every day “Every day you will come to me to give me a flower/To make my life colorful”.

That such a serious writer of articles on social issues with such reforming zeal can so gracefully plunge into unfathomable poetic ecstasy, especially of romantic love, is more than an amazing feat for any poet . Jepulin can write fast and so deeply because she breathes poetry rather than writes it.

She writes about the six different seasons of Assam in the style of the English poet Thomson and describes the beauty of all months Kartick, Aghon, Bohag, Fagun. She observes every hour of the day and can write in the morning and evening. She frankly asks in a poem: “Can I fall in love?”

She writes about the Dichang Festival and with equal grace about Tejimala, and the story of rebirth (Punor Janam Kahini) to inspire women of our time. A great poet is always a great motivator, and Joplin’s poetry not only motivates the members of the Tai Ahom Council in which she holds a prestigious position, but also readers in general. She inspires everyone in artistic pursuits even her own daughter by publishing her poetry book. All this is due to his love of poetry and life.

Her articles in almost all major Assamese newspapers and almost regular publication of poems in Assamese national dailies mesmerize readers in her passionate scholarship as she uses a lot of learning in her poems and the pictures from European and Indian literature to enrich the texture of his poems throughout this wonderful blend of reflection and passion.

It is important that she enjoys the role of organizing Tai women for progressive activities and engaging them in creative work as President of the All Tai Ahom Writers’ Council.

His poems have a wonderful range and variety which include poems on parental love, nature, society and married life, filial bond, etc. But as a spokesperson for women’s freedom, she seems to be the best.

Robert Frost once said, “I never started a poem that I knew the ending to.” To write a poem is to discover. This is absolutely what happens in the poems of Jepolin Rajkumari. His poems never overlap but always claim our attention and more than attention our sensitive reception.

To Xaponor Jonak she dreams, we see the quest for herself in Nixhar Batori, she is romantic in Nahoror Deshot Sonaru, she talks about her green land in Indranil, she writes about the beauty of Aswin, or about the emptiness of Kartick, she is the poet of the sun and yet she loves the rain. She loves red and it is the color of love and revolution. She is “a poetess of red”.

Dr. Ratan Bhattacharjee is an academician and poet. He reachable at: [email protected]