2 California teachers attacked for LGBTQ awareness are cleared of wrongdoing 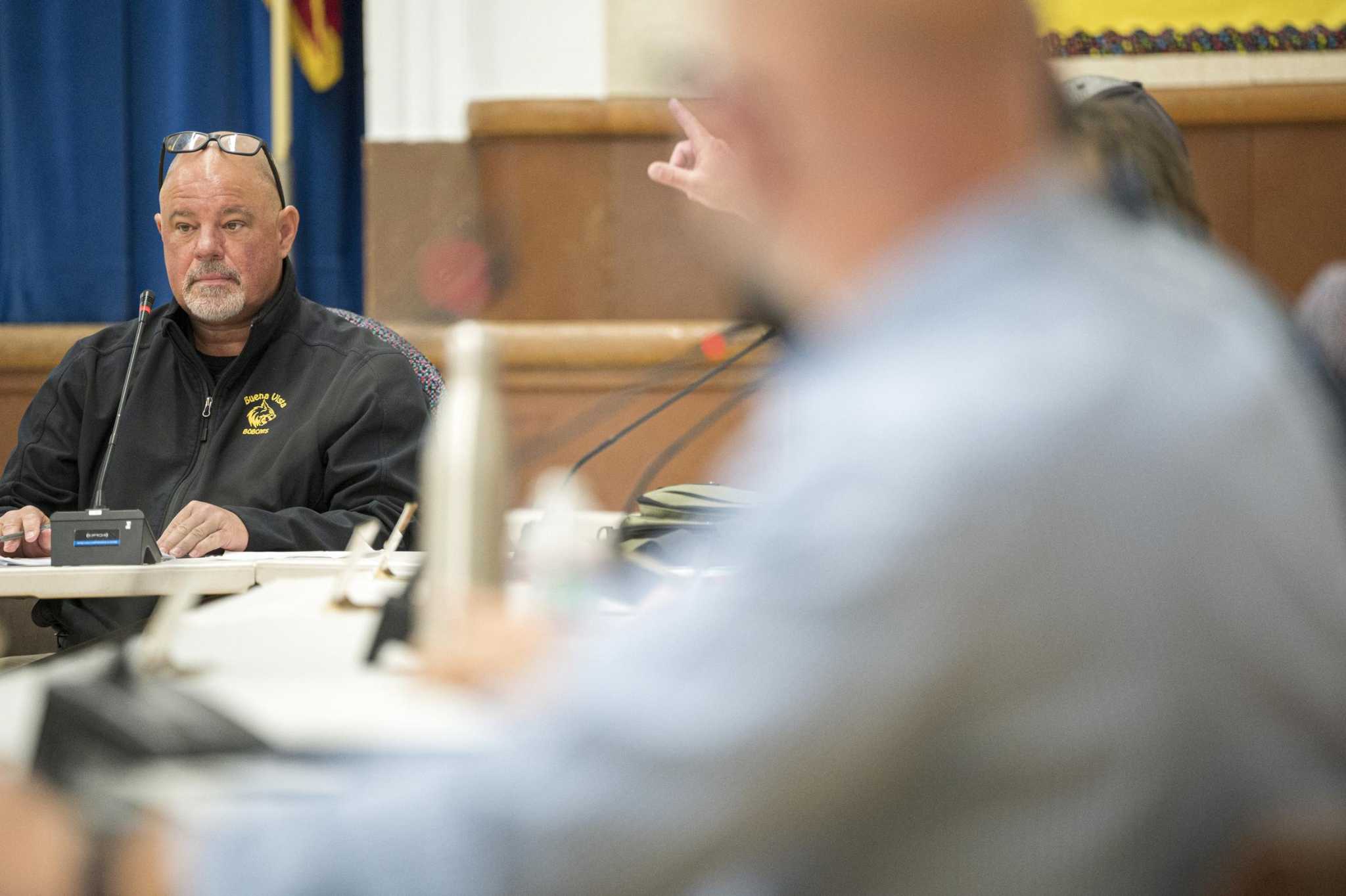 Two California teachers whose careers were threatened last year because of their leadership of an LGBTQ student club during a period of conservative backlash have been cleared of wrongdoing in an independent investigation.

The teachers, Lori Caldeira and Kelly Baraki, did not mislead parents or their school — Buena Vista Middle School in the conservative Salinas Valley east of Monterey — about club activities, and they did not “recruit incorrectly of students, according to the review by the law firm Van Dermyden Makus in Sacramento.

The results were announced late Thursday in front of a dozen attendees in the same school auditorium where the two teachers and the Spreckels Union school district board were reprimanded in December by dozens of community members.

Despite the results of the investigation, the incident caused significant upheaval, and Caldeira and Baraki resigned after being harassed across the country – and after district officials placed them on administrative leave.

Those present at Thursday’s meeting spoke of the importance of teachers to the community and of all that had been lost over the past few months. The angry parents who once filled the auditorium were nowhere to be found.

“I’m glad the results of the investigation showed what we knew all along,” Caldeira told The Chronicle in a text message.

The furor comes at a time when right-wing politicians and media figures are stirring up fear about the existence of transgender Americans demanding basic equality and acceptance. It all started when Abigail Shrier — a writer nationally known for claiming transgender teens are part of a dangerous “craze” — lashed out at teachers in her Substack newsletter.

She said educators, during a presentation last fall at the California Teachers Association’s annual LGBTQ+ issues conference in Palm Springs, were secretly taped saying they were monitoring online activity. students at school so that they can later invite them to their GSA, or gay-straight alliance, called “UBU” (You Be You).

“When we were doing our virtual learning – we totally Googled what they were doing, when they weren’t doing their homework,” Bakari said in the presentation, according to Shrier. “One of them was Googling ‘Trans Day of Visibility.’ And we’re like, ‘Check.’ We’re going to invite this kid when we get back to campus.

In an interview with The Chronicle late last year, Caldeira said the comment was “ironic” and taken out of context. Caldeira said she and Baraki had never monitored students’ online activity in this way and that she was confident that the school district-commissioned investigation would exonerate her and Baraki of wrongdoing.

“Our presentation has been twisted and misinterpreted to fit a political narrative that is harmful to LGBTQ youth,” Caldeira told The Chronicle this week. “We have been cleared of any wrongdoing. Looking forward to continuing to support public education and our amazing LGBTQ youth.

The investigation found that teachers had made comments during their presentation at the CTA conference that were ‘admittedly inaccurate’, ‘harmful’ and ‘disruptive’, giving the impression that they had misled school administrators and teachers. parents on the functioning of the club.

Yet the teachers “did not engage in any actual deceptive conduct in relation to the purpose and activities of the UBU club”, the review concluded. “On the contrary, their comments during the presentation were not reliable evidence of their actual conduct.”

Erich Knorr, a partner at the law firm, said he reviewed more than 1,600 pages of documents and interviewed 21 witnesses, including current and former administrators, teachers and students. Investigators found that Caldeira and Baraki did not “stalk” or monitor students’ online activities to recruit students for the club.

Knorr said the two teachers, like their colleagues, used GoGuardian, a program that allows schools to view students’ computer screens, but “did not use the reports for club recruitment. The two teachers had planned to invite a student to the club after noticing that the student had clicked on a link related to the LGBTQIA+ community in class around March 31, 2020. However, they ultimately did not invite this student to the club.

The investigation found that teachers did not ‘coach’ students on changing their gender identity, and did not use ‘tricks’ on students or use any other tactic to avoid complaints from parents. Right-wing pundits and others have claimed, without evidence, that young people are being coerced into becoming transgender.

The fight for the LGBTQ club is not over. Before the investigation was completed, a former school mother, Jessica Konen – who had criticized the district at the December meeting – filed a lawsuit against the board, the two teachers and the principal, arguing that they had hurt her by not informing her that her child had chosen to use a different name and pronouns at school.

“The defendants denied Ms. Konen this right during a crucial phase of AG’s development, choosing for themselves how to direct AG’s education regarding AG’s major gender identity life decision, and hiding critical facts from Ms. Konen, her parent,” the complaint states, echoing the language of other parental rights lawsuits across the country that focus on issues ranging from teachings about race to sexuality and gender. gender.

According to the complaint, the school had a policy that teachers and staff would not tell parents if children expressed confusion or wanted to change their gender identity, unless the student specifically requested that the parents be notified. .

The district and the two teachers declined to comment on the lawsuit. But California law doesn’t require teachers to tell parents about a student’s gender identity. In fact, it could be considered gender discrimination, if staff members only tell parents when their child identifies as transgender, said UC Hastings General Counsel John DiPaolo, who has no involvement in the Spreckels case.

California Department of Education Says School Personnel Should Not Disclose Student Gender Identity Information Without Student Permission Under Assembly Bill 1266, Which Protects Rights transgender students and came into effect in 2014.

“A transgender or gender nonconforming student may not openly express their gender identity in all settings, including at home. Revealing a student’s gender identity or expression to others may compromise student safety. Thus, the preservation of a student’s privacy is of the utmost importance,” the Department of Education guidance states.

Cathy Chu, youth organizing director for the national Genders & Sexualities Alliance Network, which supports GSA clubs in schools, said that in situations where parents have tried to prevent their children from attending meetings , “School administrators said they could communicate this request, but they had no real authority to prevent a student from attending a GSA club or to let their parents know if they were attending.

Konen’s lawsuit, which alleges causes of action including intentional infliction of emotional distress, details his belief that Caldeira “coached” his child into changing his name and pronouns. The lawsuit says Caldeira failed to properly inform Konen, while acknowledging that the teacher eventually leaked the information during a meeting with the parent and child.

The complaint states that during pandemic distance learning, Konen’s child “began to revert to his original state.” The child now goes to another school and his mother says she has started using feminine pronouns again. “Ms. Konen and her daughter sought counsel from their pastor in an attempt to overcome the harm described here, and they will likely continue to seek such counsel in the future, among other potential mental health treatments,” the suit states.

District officials did not comment on their decision to furlough Caldeira and Baraki. In a statement in December responding to Shrier’s article, the district called the allegations “alarming, concerning, disappointing” and not reflective of the school, prompting the investigation.

While the UBU club of Caldera and Baraki was closed when the investigation began, in January the district released a statement saying it is “a top priority to ensure that clubs like UBU will continue to be available for students”.

At the school board meeting on Thursday, parents, teachers and students expressed their sadness at the loss of teachers.

“These teachers were just supportive, kind and amazing at their jobs,” said Caldeira alumnus Chloe Valdez. “I hope this moment can serve as a lesson to ensure that an attack on innocent teachers never happens again.”